Whose story is this?

Before writing, I recommend filling out a character worksheet for at least the main character (psst, this is one of your assignments). CLICK HERE to view and/or print the character-building worksheet. You do not need to answer all of the questions, and might not be able to yet. Some questions might not apply to your character. As you write your story, more details will come to light. I encourage you to add these details to your character’s worksheet. Character sheets can help you in the following ways:

You are not required to continue using character sheets throughout the entire term. If, after filling out your main character’s sheet, you find it to be useless to you, then feel free toss it in the bin.

What? Yes, just when you thought you were done outlining, Fumbly asks you to do it again!

Please don’t give up and leave. This will not be the same as your Lesson 2 outline. You might be surprised to learn that I don’t love planning too much prior to writing. However, if I don’t plan at all, I fall into a tangle of random hole-filled webs of inconsistency… and never finish.

Chapter outlines should be great fun for this particular crowd, because we’ll be outlining just like J.K. Rowling! Instead of building the framework for your entire story, you’ll instead outline a few chapters at a time. I suggest beginning with only two chapters to acquaint yourself with the process.

“I plan a lot. This particular novel’s plan comprises a vast, complicated, colour-coded table showing all the suspects, with blue ink for clues and red ink for red herrings.”
-J.K. Rowling, 2018 (Twitter)

Before we move on… let’s admire Rowling’s Order of the Phoenix outline once more : 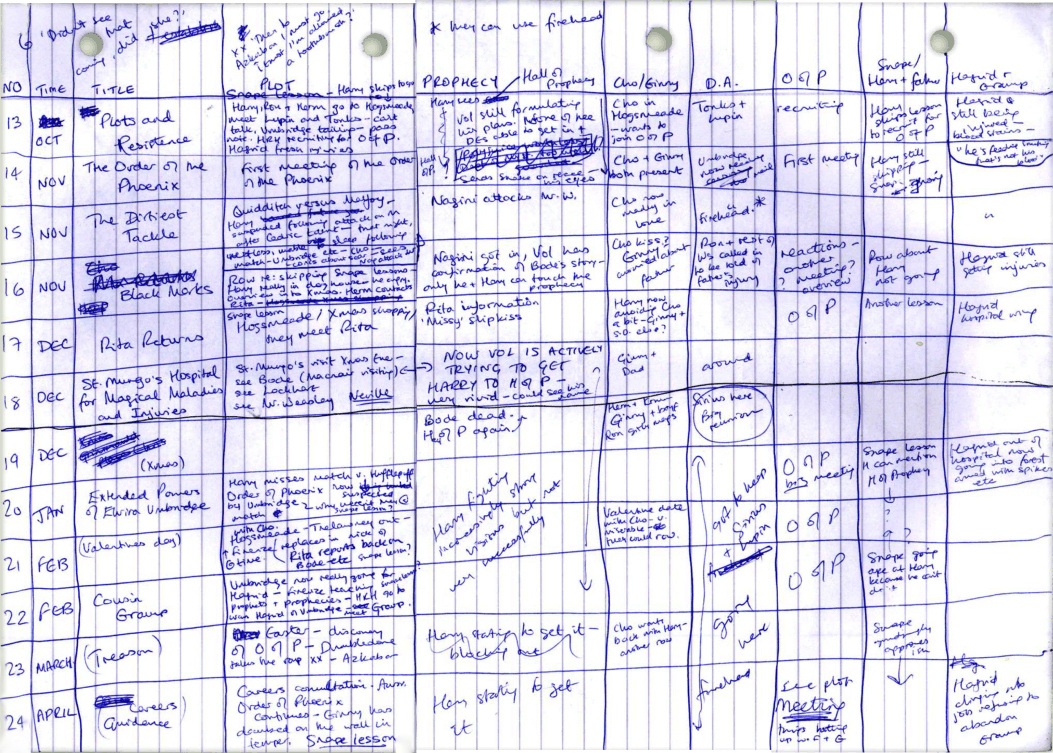 Have you finished gazing in awe? Now CLICK HERE to view, print, and/or fill out a similar chapter outline online or scribble one out yourself in longhand.

Beginning with Chapter One, track the time of year, chapter title (if you have one), general plot details, and what each important character (or group) is doing in this chapter. If, while filling out your outline, you discover more details about your character, add those details to the respective character worksheet.

Even if a character isn’t introduced until half-way through your story, track them in your outlines from the beginning. I am over half-way through my current novel, and I’ve been tracking a character the entire time… who probably won’t appear until the climax! It might feel useless to you. However, when you introduce new characters, it helps a great deal to know everything they’ve been doing until then.

As you can see, filling in these details for each chapter goes quickly. I usually tackle between three to five chapters at a time. If I don’t, my writing pace slows to a crawl. When armed with J.K. Rowling’s fabulous  tool, I write faster than ever!

I also appreciate that I’m not committed to sharing all the details that appear in my outlines. It also barely dictates the chronology of each chapter. I’m free to “wing it” while also benefiting from the guidance the outlines provide. I don’t create well when confined, so these methods help me track details while also allowing me freedom to wander while I write.

Once you feel ready, begin writing. Do not worry yourself with style and perfection at this point. Your immediate goal is to tell the story, from beginning to end. You do not have to tell it well. Not yet.

There is one more detail to keep in mind while drafting your first chapter (though, depending on the story, this might be worked in later). Without this, no reader might ever commit to reading your story. They might read a few pages (if you’re lucky) and drop the book, never to pick it up again. Without this, your readers have no reason to read your story.

I’m talking about… The Hook.

Bearing this in mind, just write. If you are fortunate to craft a good hook while writing your first draft, that’s great! If not, then the hook isn’t ready to be crafted yet and will arrive in a later draft… and that’s great too!

I will leave you with the only writing rules I will enforce in this class:

“…write your story as it needs to be written. Write it honestly, and tell it as best you can. I’m not sure that there are any other rules. Not ones that matter.” -Neil Gaiman

Advice on Writing
(from popular authors)

· “Sometimes you have to get your writing done in spare moments here and there.”
· “What you write becomes who you are… So make sure you love what you write!”
· “I always advise children who ask me for tips on being a writer to read as much as they possibly can. Jane Austen gave a young friend the same advice, so I’m in good company there.”
· “I just write what I wanted to write. I write what amuses me. It’s totally for myself.”

1. Write.
2. Put one word after another. Find the right word, put it down.
3. Finish what you’re writing. Whatever you have to do to finish it, finish it.
4. Put it aside. Read it pretending you’ve never read it before. Show it to friends whose opinion you respect and who like the kind of thing that this is.
5. Remember: when people tell you something’s wrong or doesn’t work for them, they are almost always right. When they tell you exactly what they think is wrong andhow to fix it, they are almost always wrong.
6. Fix it. Remember that, sooner or later, before it ever reaches perfection, you will have to let it go and move on and start to write the next thing. Perfection is like chasing the horizon. Keep moving.
7. Laugh at your own jokes.
8. The main rule of writing is that if you do it with enough assurance and confidence, you’re allowed to do whatever you like. (That may be a rule for life as well as for writing. But it’s definitely true for writing.) So write your story as it needs to be written. Write it honestly, and tell it as best you can. I’m not sure that there are any other rules. Not ones that matter.

Do you love novel-building worksheets?
(I do!)